Last year, the Frontier was redesigned after so many years and that brought a significant increase in sales numbers. In the first three quarters of this year, the Japanese manufacturer sold more than 56.000 units, which is more than Ford Ranger and pretty close to the Jeep Gladiator. Therefore, Nissan management believes that there is enough room for further improvements, which could be achieved by some interesting updates. That’s why we believe that the 2024 Nissan Frontier could bring interesting novelties, even though it is still way too early for a major update.

The current generation was introduced last year, so we have no doubt that the overall design will remain the same. On the other hand, we believe that the next year’s model could bring some upgrades in terms of off-road performance, while some sources even speculate about a hybrid powertrain. At this point, the officials are still quiet, so take the following paragraphs with a reserve. 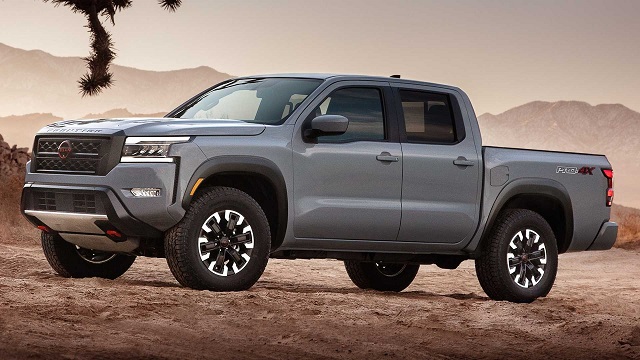 As we’ve just mentioned, it is still early for a mid-cycle refresh but on the other hand, smaller-scale updates are always possible. While the overall layout is about to remain the same, some sources suggest that the Pro-4X could receive some upgrades. Even though a decent off-roader, with standard four-wheel drive, two-speed transfer case, hill-descent control and all-terrain tires, this version would also use a locking differential, to compete with models like Tacoma TRD-Pro or Colorado ZR2.

On the other hand, standard models should continue in the same way, offering ride quality that is better than most competitors, especially when it comes to on-road manners. This pickup rides great, while we also like its look, which is modern and rugged, and which probably won’t feature any notable updates for the next year.

The same thing is on the inside, where we don’t expect to see bigger changes. Instead, the 2024 Nissan Frontier will continue with the same design, with a layout that has a lot to offer. The cabin is wrapped with nice materials and features good overall build quality. It’s also equipped with lots of tech features, so we could say it looks nicer compared to most rivals. 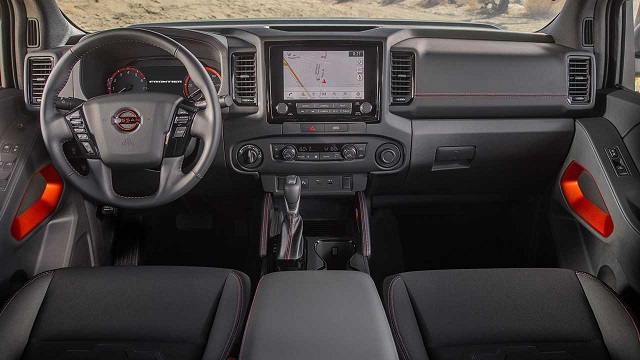 On the other hand, things aren’t so great in terms of passenger space. The King Cab model comes with pretty spacious front seats and a tight second row. While that’s expected for this cab style, the Crew Cab model, although bigger, is still less spacious compared to rivals. The second row accommodates three passengers but it would use more legroom.

Behind the cabin, the 2024 Nissan Frontier will continue with two bed sizes. The short bed is good for 5 feet, while the optional long bed is 6-foot 1-inches long.

Some sources speculate about the hybrid version for the next year. Allegedly, the company is working on a plug-in hybrid system, which would be based on a turbo-four engine and would offer a max output of around 300 horsepower. The system would also come with a battery pack that’s large enough to provide more than 50 miles of all-electric range.

On the other hand, standard models will continue with a 3.8-lite V6, which puts out around 310 horsepower and 281 pound-feet of torque. The engine comes coupled with a 9-speed transmission and the whole system feels pretty refined, while the overall performance is very good.  The average fuel economy goes around 18 mpg in the city and 24 mpg on the highway, which is typical for a V6-powered mid-size pickup. 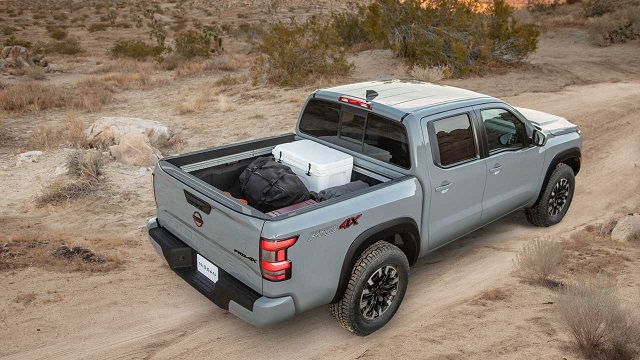 We expect to see the 2024 Nissan Frontier launches sometime in the second half of 2023, with a starting price of around 30.000 dollars. The key competitors will remain the same – models like Ford Ranger, Jeep Gladiator and Chevrolet Colorado.