The new generation of Chevy’s mid-size pickup is here and we can say that the company has brought some pretty notable improvements in various aspects. Therefore, we expect that the 2024 Chevrolet Colorado, which will represent the second model year of the new generation, will carry on without bigger changes. We expect to see it offered at its full potential, in several versions and trim levels.

This pickup now comes with the most capable powertrain in the class, and we also like its amazing towing capacity and off-road performance. Compared to the previous generation, the bigger improvement came in terms of the ride quality, while the cabin is also much nicer now.

We expect that the 2024 Chevrolet Colorado will hit the market sometime in the second half of the next year. 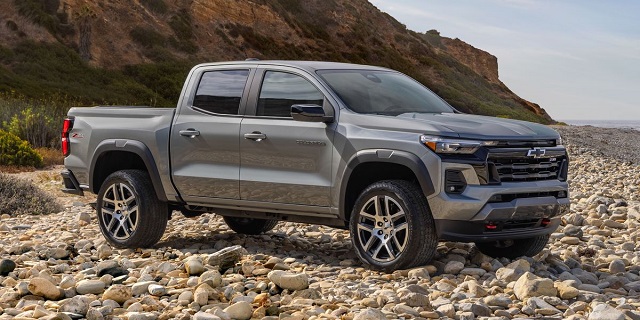 As we’ve just mentioned, the 2024 Chevrolet Colorado will represent the second production year of the new generation and, therefore, we don’t expect to see any notable changes. Instead, we count on a familiar layout, which now offers completely new styling, way more attractive than before.

On the other hand, the new generation continued to ride on the GMT 31XX platform. Still, we saw various updates, particularly in terms of the new suspension setup, which provides a much better ride quality than before.

Much better on-road manners are definitely a huge improvement but the new generation retains excellent off-road potential as well. This particularly refers to the two off-road-focused versions – Z71 and ZR2. The former is more affordable and a milder off-roader, but still with decent capabilities. It features an upgraded off-road suspension, all-terrain tires, limited-slip differential etc.

On the other hand, the ZR2 is the most capable off-roader in the lineup, with further suspension upgrades that include higher ground clearance, Mutlimatic DSSV dampers, revised bumpers for better approach and departure angles, locking front and rear differentials etc.

The recent redesign has brought many improvements but we believe that the biggest ones were those in terms of the interior design. The new cabin looks way more upscale and that is for many reasons. First of all, the materials are much nicer than before. Also, the new aesthetics are way more attractive, with a combination of rugged shapes and various tech and convenience features. Speaking of the tech features, the new 11.3-inch infotainment screen is definitely one of the highlights. Also, the center console now features a little bit different organization, where the gear shifter is closer to the passenger seat, so there is a new mode selector between the driver and gear lever. 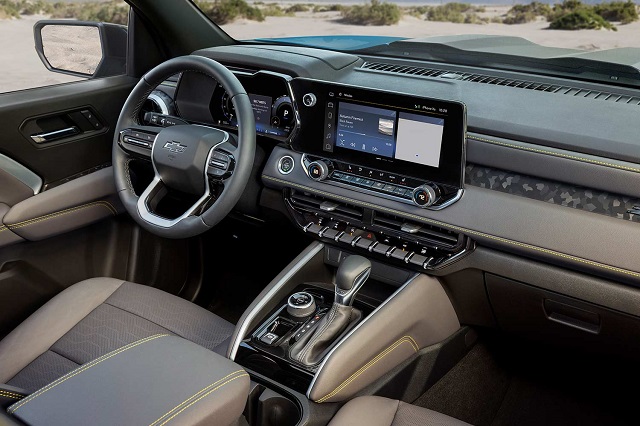 All versions come coupled with an 8-speed automatic transmission, which is smooth and pretty responsive. The max towing capacity goes around 7.700 pounds with the more powerful engine. On the other hand, the base engine can tow no more than just 3.500 pounds. 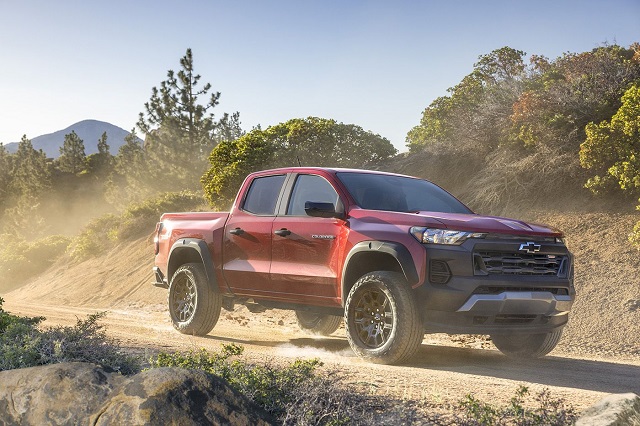 We expect that the 2024 Chevrolet Colorado will hit the market sometime in the second half of 2023. When it comes to the price, base models should go around 28.000 dollars, while the most expensive versions will get pretty close to $50.000. Of course, the competition remains the same, with models like Toyota Tacoma, Ford Ranger, Jeep Gladiator etc.