The new generation of Ford’s mid-size pickup is almost here and it brings all kinds of improvement compared to its predecessor, which has been in production for a full decade. One of the interesting novelties is that the new generation will be more focused on the U.S. market than before. This will be notable in many ways, including the fact that the off-road performance Raptor will be offered in North America for the first time. The model that was exclusive to Australia and Europe, will come completely new as the 2024 Ford Ranger Raptor.

The Blue Oval company already presented the new U.S. Raptor and we can see some pretty interesting differences in approach. Of course, this particularly refers to the powertrain, which will be gasoline-powered. Of course, upgrades in other aspects will come as well, especially when it comes to off-road performances.

We expect that the 2024 Ford Ranger Raptor will hit the market sometime in the second half of 2023.

The 2024 Ford Ranger Raptor will be based on the new generation of the popular pickup. The new design is also based on the T6 platform but it brings upgrades and new technical solutions in many aspects, especially when it comes to sturdiness and weight reduction.

This particular version will come with all kinds of mechanical upgrades. Of course, this particularly refers to off-road features, starting from the upgraded suspension, with a more rugged setup, higher ground clearance and more travel. Furthermore, this version will come with additional traction control modes, locking front and rear differentials, low-range gearing and many other important upgrades. Naturally, You may also count on 33-inch all-terrain tires, skid plates and many more.

Besides significant mechanical upgrades, this model also comes with lots of exclusive styling details that accentuate its performance character. Practically, we are about to see the same approach as in the case of the F-150 Raptor, with unique wheels, blacked grille, lots of blacked details around etc.

When it comes to interior design, once again we expect to see a typical Raptor treatment, with exclusive color schemes, unique stitching and colored accents and similar things. Still, the overall cabin design will be the same as in the standard model, with a much nicer design compared to the previous generation. You can notice nicer materials and more attractive aesthetics, along with lots of new tech features. We expect to see the 2024 Ford Ranger Raptor with a massive, vertically-oriented touchscreen, digital instrument cluster and many other techs and convenience goodies. 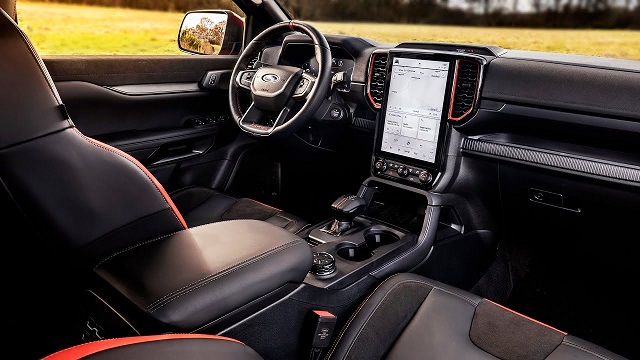 When it comes to the overall cabin layout, we expect to see the double cab variant only. This meant that the new off-road will be spacious enough to carry up to five people and we expect that the second row will also be very adult-friendly in terms of leg and headroom.

One of the main characteristics of the 2024 Ford Ranger Raptor for the U.S. market will be the engine. So far, the Raptor was offered in Europe and Australia and it was powered by a 2.0-liter turbodiesel. On the other hand, the North American version will feature a gasoline engine.

More precisely, we are about the see a 3.0-liter twin-turbo V6, in a variant that offers a total output of 392 horsepower and 430 pound-feet of torque. The engine will come in a couple with a 10-speed automatic transmission, which will send power to all wheels.

On the other hand, details about the new Raptor for abroad markets are yet to be announced. There’s a big chance to see it with a diesel engine again. However, this time it would probably come with a 3.0-liter V6 turbodiesel, with a max output of 250 horsepower and 460 pound-feet of torque. 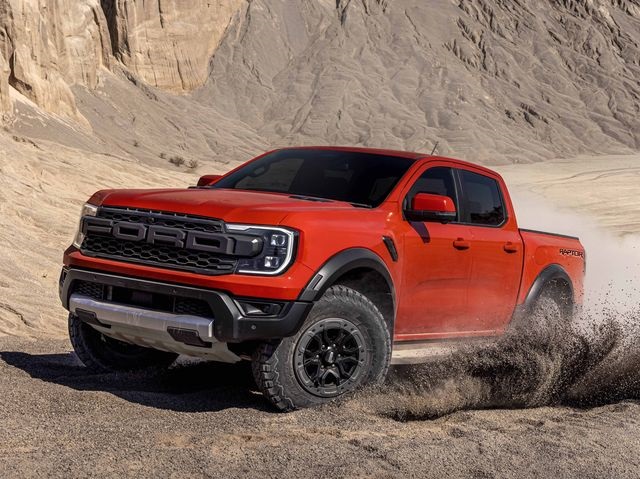 We expect that the 2024 Ford Ranger Raptor will arrive sometime in the second half of 2023, with a starting price of around 45.000 dollars. Key competitors will be models like Jeep Gladiator Rubicon, Chevy Colorado ZR2, Toyota Tacoma TRD Pro etc.