The famous truck came back to the North American market recently. However, it didn’t actually meet our expectations. Although the company calls it a new model, it is practically nothing more than a reworked version of the Australian Ranger, which has been on the market for a pretty long time, since 2011. The new U.S. model does feature a new styling but mechanically, this is still a T6 Ranger. Therefore, it’s no wonder that the new generation should come pretty soon, already in about two years, as the 2021 Ford Ranger. Those are the latest reports and they sound quite possible, especially if we consider that the new Bronco is coming, and it should serve as a basis for the new truck.

This redesign is about to bring a lot of novelties, as you may presume. The first thing that comes to mind is the platform, which is about to replace the aging T6 architecture. The new one should provide improvements in many aspects, including efficiency, performances, driving characteristics etc. Although the Australian department will probably have a big share in the development of new models, we are pretty sure that the 2021 Ford Ranger will borrow many design solutions from the full-size F-150, especially in terms of the massive use of lightweight materials light aluminum and HSS.

Of course, one of the most interesting things about the new generation will be its styling. According to some leaked photos, the new Ranger will look quite robust. With massive grille and muscular fenders, it looks like many design solutions were borrowed from the Super Duty series. It is still hard to say will these aesthetical solutions be materialized. However, there’s no doubt that the Blue Oval company will put a lot of efforts to create a truck that won’t be just capable, but also very attractive. After all, the competition is getting tougher and tougher these days. Of course, Tacoma still leads the market. However, the arch rival Chevy Colorado is expected to come with novelties in the near future as well, not to mention that the new Gladiator looks very promising. After all, the Nissan Frontier is also about to finally receive an overhaul. 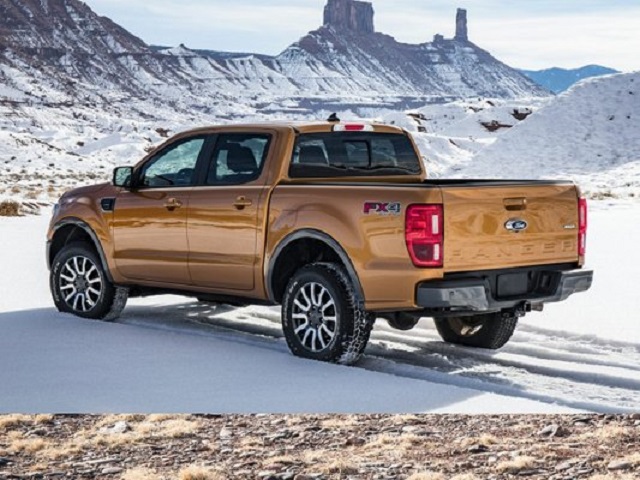 Of course, one of the things that come to mind is powertrain. We presume that the new model would come with a familiar 2.3-liter EcoBoost unit. It should get a slight boost and feature around 300 horsepower. Other than this engine, we also count on some hi-performance unit, probably with a 2.7-liter V6 engine, with around 350 hp. Of course, we would like to see a diesel version in the offer. Some reports also suggest electrification in the near future as well. That would probably be a plug-in hybrid, though we won’t exclude to the possibility to see an all-electric version as well.

Most likely, the 2021 Ford Ranger will come sometime in about two years. We presume that the price won’t be much different compared to the current model, which goes around 24.000 dollars.