Toyota’s full-size pickup has finally come completely redesigned, after almost 15 years. The new model brought a full load of novelties and, of course, this includes a completely new version of Tundra’s off-road-oriented version, known as the TRD Pro. This model has always been known for all kinds of off-road hardware, as well as for a lot of exclusive styling details and a lot of exclusive interior details. Considering all these novelties, we expect that the 2023 Toyota Tundra TRD Pro, which will represent the second production year of the generation, will come without more important updates.

Still, there are sources that speculate about possible changes. According to them, we could see novelties under the hood. The current is available only with the hybrid powertrain, while the next year’s model could come with the V6 engine as well, according to these sources. At this point, the officials are still quiet on this, so make sure that take this with a big reserve.

In any case, we expect that the 2023 Toyota Tundra TRD Pro will hit the market sometime in the last quarter of the year. 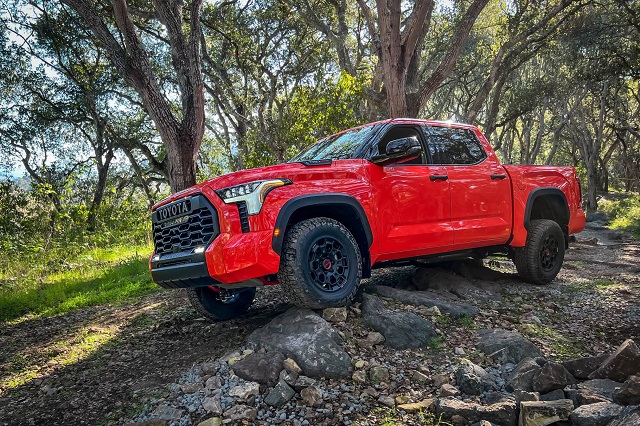 Since we are talking about the second production year of the new generation, it is quite obvious that bigger changes won’t happen. Instead, we will see the same design, which came completely new for the 2022 model year. The new model rides on a new platform and brings completely new styling, while the TRD Pro model comes with a full load of exclusive features.

This particularly refers to the off-road hardware, which is numerous in this case. Of course, four-wheel drive is standard, while you may also count on FOX shocks, as well as on a 1.1-inch suspension lift. Furthermore, this version comes standard with a rear locking differential, crawl control, skid plates etc.

Also, there is a number of exclusive styling details, which accentuate the model’s off-road character. You may count on a unique grille design, wheels, black exterior trim and a full load of TRD Pro accessories.

We don’t expect interior changes either. The 2023 Toyota Tundra TRD Pro interior shouldn’t bring any particular change. So, you may count on a completely new cabin design, which comes with a couple of exclusive features in this case, starting from exclusive color schemes and similar things. 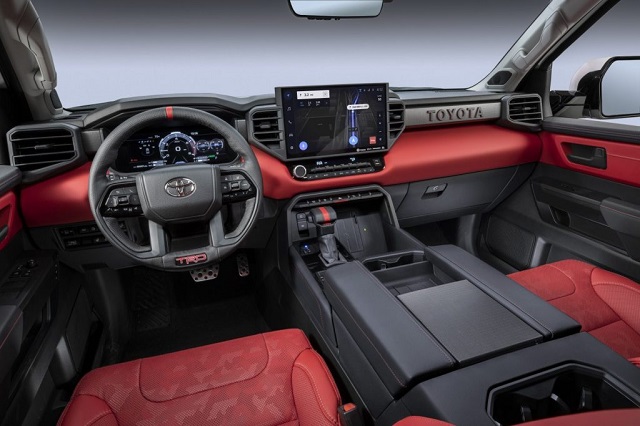 Still, the overall cabin layout isn’t much different compared to the rest of the lineup. The new cabin looks pretty attractive, while the build quality is significantly better compared to the previous generation. Just like the current model, the 2023 Tundra TRD Pro will also come only in a CrewMax layout.

This isn’t just a capable off-roader. This pickup also comes with a pretty long list of standard equipment. It includes some pretty exclusive features, which can be found only in this and Limited trim levels. Some of the highlights are goodies like upgraded LED headlights, ambient interior lighting, power-adjustable and heated steering wheel, leather upholstery, premium JBL sound system, wireless charging, 360-degree camera etc.

Currently, the TRD Pro is available only with a hybrid powertrain. This version uses a system that combines a V6 engine with electric motors, for a total output of 437 horsepower and 583 pound-feet of torque. The system is paired to a 10-speed automatic transmission.

Some sources suggest that the 2023 Toyota Tundra TRD Pro could also be offered with a more basic, gasoline-only powertrain. We are talking about the twin-turbo V6 engine, which puts out around 389 horsepower and 479 pound-feet of torque. This engine also comes in pair with a 10-speed automatic transmission. 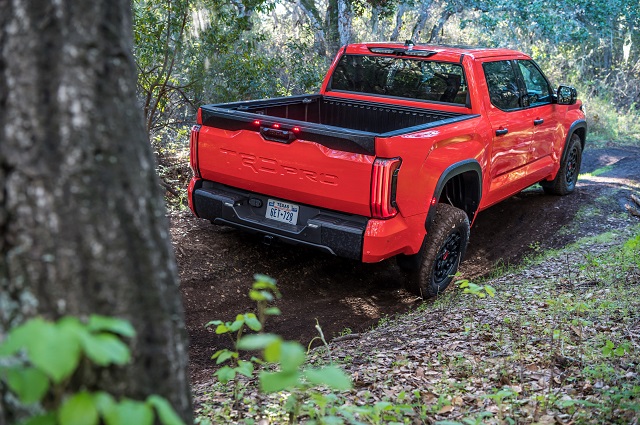 We expect to see the new model sometime late in the year. When it comes to the 2023 Toyota Tundra TRD Pro price, the current model starts at around 68.500 but have no doubt that the gasoline-only version would be significantly cheaper. Some sources suggest a price tag of around 57.000 dollars. Models like Chevy Silverado Z71 and GMC Sierra AT4 are some of the key competitors.