Not so long ago, the Raptor was an undisputed off-road performer among pickup trucks but things are different now. The new Rebel TRX is here and it stands out with a monstrous Hellcat engine. Logically, the Blue Oval company prepares an answer and it looks like it will come pretty soon, in the form of the 2022 Ford F-150 Raptor R. This will be a more extreme version of the Raptor, with a lot of further upgrades.

Of course, the most significant upgrade will be under the hood. We will see significantly more power but that won’t be the only change over the standard Raptor. We will also see a couple of changes on the chassis, while there is no doubt that the designers will accentuate its unique performance character with additional styling solutions. According to the latest reports, the new model will arrive by the end of the year.

Without any doubt, the biggest novelty will be the new engine. Even though the standard Raptor already offers a respectable amount of power with its twin-turbo V6, the problem is in a new competition, which comes in the form of Rebel TRX. That’s why the Blue Oval company works on this model, called the 2022 Ford F-150 Raptor R. Some sources even suggest it could come under Shelby’s badge, though the officials are still quiet about this.

In any case, the 2022 Ford F-150 Raptor R will borrow the engine from Mustang GT500. This would mean a supercharged 5.2-liter V8, which should be specially configured for this pickup truck. The max output will lower compared to the famous pony, but should still go over 700 hp. Of course, it would come in pair with the same 10-speed automatic transmission, which sends power to all wheels. 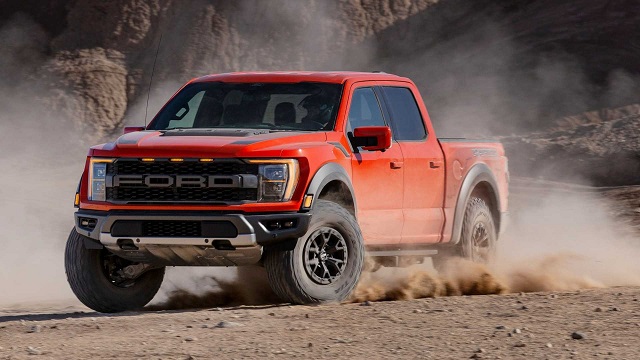 Besides the new engine, the 2022 Ford F-150 Raptor R would come with other kinds of upgrades, both in terms of mechanics and aesthetics. When it comes to mechanics, we would see all those upgrades that characterize the standard Raptor, including all those off-road goodies. Furthermore, we can see a lot of talk about further suspension upgrades. Allegedly, the rear suspension would come with coil springs instead of the standard leaf spring setup. Naturally, we would also expect to see bigger brakes that can deal with all that additional power.

Interior upgrades are possible as well. Of course, the first thing that comes to mind is “Raptor” badges and stitchings around the cabin, while we also count on unique color schemes and materials. Paddle shifters are expected too. Naturally, the list of standard equipment should be pretty long.

On the other hand, the overall cabin design will be the same as in the new-generation F-150, which brings a lot of improvement compared to the previous generation. The dashboard looks nicer and comes with new materials. Also, the build quality is better, while we particularly like the new, large touchscreen, which should be standard in this model. We presume that the 2022 Raptor R will be offered in the crew cab version only.

Although the officials are still quiet about the launch date, we believe that the 2022 Ford F-150 Raptor R could arrive by the end of the year. The price is still a mystery, but we estimate it could start at around 75.000 dollars.